Russell Morris and the Rubes – Live at the Palladium 1982 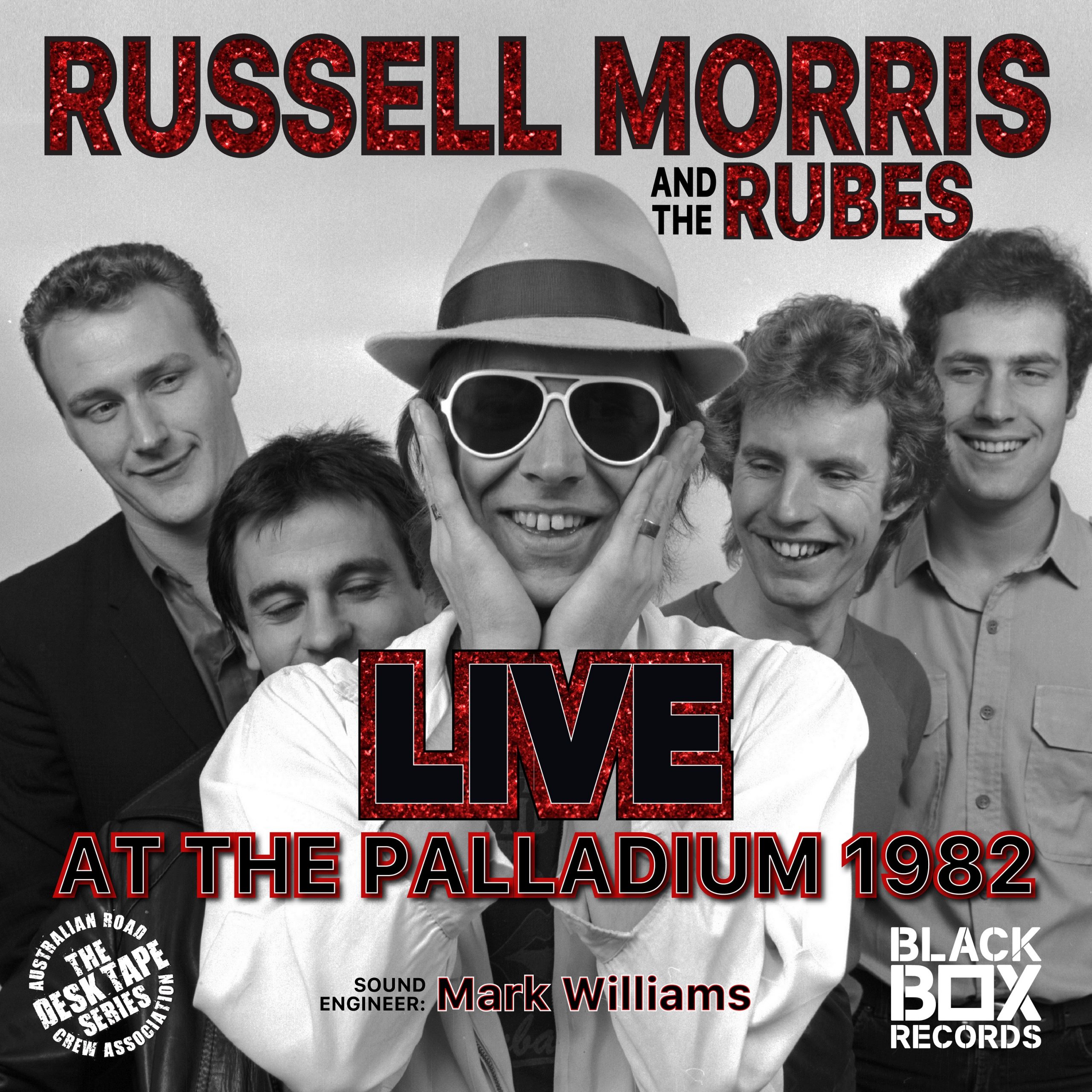 Russell Morris and the Rubes LIVE at the Palladium 1982, is the 13th release of the Australian Road Crew Association’s (ARCA) Desk Tape Series.

The successful ARCA Desk Tape Series was created by ARCA to raise funds and resources for Support Act’s Roadies Fund to provide financial, health, counselling and well being services for roadies and crew in crisis.

The tapes are released on ARCA’s Black Box Records through MGM Distribution and on all major streaming services.

Thanks to Greg Noakes for the photos, Nprint for the cover artwork, Phil Dracoulis for the mastering and Russell Morris and the Rubes for supporting roadies and crew.

The live tapes are made straight off the mixing desk and made by a road crew member, in this case their sound engineer Mark “Ramjet” Williams, who did the sound for the band for 12 months.

The Russell Morris and the Rubes LIVE at the Palladium, 1982 tape and all the ARCA Desk Tape Series recordings are available through:

The Rubes were formed in 1980 as a vehicle for Russell Morris’ songwriting after he returned to Australia after a lengthy stay in the US.

His early hits like ‘Hush’, ‘The Real Thing Pts. 1, 2 & 3’ and ‘Rachel’ were written by others but he wanted to concentrate on his own work.

“Being a pop star was a wonderful place to be, until I realised I had painted myself into a corner and I lost control of my life,” he admits.

“I decided to sink or swim, and I needed to sing my own songs to have a ring of truth.”

The self-penned ‘Wings of An Eagle’, ‘Sweet Sweet Love’ and ‘Mr America’ continued his run of hits.

‘Wings of An Eagle’ was inspired by Morris’ love for ancient mythology, and how First Australians, Native Americans and early Romans believed an eagle took the spirits of the dead to the heavens.

‘Sweet Sweet Love’ was made up of two songs, inspired by a photo of his then-wife which he stuck up on the wall of a freezing bedsit in London while trying for UK success.

The Rubes formed in 1980 from the ashes of The Russell Morris Band, who imploded through personality clashes between some members.

The new line-up included Bruce Haymes and Max Chazan. They’d been in a band called The Rubes, so the name was kept.

The Rubes’ set centred on interplay between Haymes’ keyboards and Chazan’s guitars, and did wonders for Morris’ newer songs as ‘Roar Of The Wild Torpedoes’, ‘Surprise Surprise’, ‘Thunderground’, ‘In The Heat Of The Night’ and ‘One Way Street’, all featured on Live At The Palladium.

The set also included hits as ‘Hush’, ‘Eagle’ and a gritty ‘Mr. America’ and album tracks as ‘So Tough’, ‘Love Stealer’ and ‘How We Run’.

Morris says, “They were really good players. What struck me when I heard Live At The Melbourne Palladium was how fast we were playing.

“Those were the times I guess, you had to go rat-tat-tat to get people jumping up and down!”

The Rubes’ music got critical acclaim but mainstream radio refused to play their tracks as they considered Morris – and many of his contemporaries – “old hat”.

Morris says, “I was writing a fair bit. I’ve always written. But unfortunately I was desperate to get The Rubes up and running with some big hit albums, so we could cut back on the roadwork and not get overexposed and I could pay the guys the same amount of money.

“But many writers fall into the trap of looking at what is happening, and you try and chase it. It’s like trying to catch a boat that’s already left the port. I call it chasing the pied piper.”

However ‘The Roar Of The Wild Torpedoes’ still remains in his current set, and fans who recently discovered Morris through his blues/roots renaissance have hunted down these songs.

By 1983 the five Rubes made a decision: if their single ‘Get It Right’, which they rated highly, wasn’t picked up by radio, they’d call it quits.

“Every night during the encore of ‘The Real Thing’ I’d leap on Bruce’s back and play guitar. It was only later that I discovered he had a chronic back problem, and that he wore braces and had to have exercises every day because of it.

“I said to him, why didn’t you tell me, I could have done serious damage to your back. He said, It was part of the show and you looked like you were enjoying yourself’. He’s a lovely man and I adored being with him.

“He was a geophysicist, highly intelligent, who could have made a fortune working for a mining company. But being an environmentalist and a highly principled man, he declined that route.”

Haymes went on to play with Bachelors from Prague and Paul Kelly, and won an ARIA for soundtrack for the feature film Lantana (2001).

Chazan, an economic graduate, made a fortune on the stock market. Puchala went on to work for a trucking company. Philipas died in the 1990s.

What followed was a tough period when the music work dried up. It was a stressful time during which time a marriage broke up. He tried music theatre (Jesus Christ Superstar) and wrote jingles (Island Cooler, the Australian Diamond Company) and teamed up on retro-acts as (Ronnie) Burns (Daryl) Cotton & Morris and Cotton (Jim) Keays & Morris.

These were financially rewarding, but not artistically. “I thought, no one is interested in my trying to hits, I should just write for myself.

“It was a question of just thinking of what got me into music. The first Rolling Stones album, Robert Johnson, John Lee Hooker, Howlin’ Wolf, Bob Dylan, go back to writing simple songs.”

One day he saw a faded newspaper photo of the criminal Thomas Archer, which virtually spoke to him, “Write a song about me.” It struck a chord and he started writing of real-life Australian characters, locations and experiences.

“It was a real accident but it brought me back out of the wilderness.”

The 2012—2015 trilogy Sharkmouth, Van Diemen’s Land and Red Dirt – Red Heart saw him back in the charts and in demand for gigs. He followed up with more successful albums.

People suddenly remembered his songwriting and singing prowess, and Russell Morris went on to be inducted into the ARIA Hall of Fame and Australian Songwriters Hall of Fame and in 2018 given the Order of Australia medal for his services to music.

SUPPORT ACT SERIES ASKS MUSIC COMMUNITY TO TUNE UP, NOT OUT

Three months on, Gimme Shelter is tackling ‘real and very open struggles’ for artists and managers