Kathy O’Hara – “Get this old Rock Chook Back on her feet!” 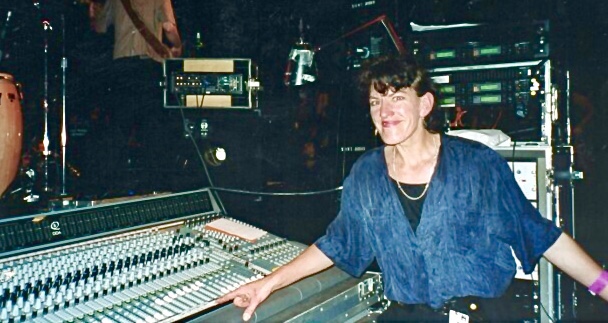 In ’83, the active live music scene in Sydney provided an opportunity for a keen young audiophile to worm her way into the biz – unloading trucks, and learning to rig, patch and tune PA systems.

There was a fair few detractors (“I tell ya, there’s no room for a chick on the road…unless she’s on her back” or “Nah, leave that for the boys, love. You take this snare drum, and put it on stage.”), but an astonishing amount of support and acceptance – Yogi, Micheal Orland, Jeff Stewart, Arthur Allaylius, Kim Hasanik, were early mentors, but there  were many more.

What a wonderful job – hours 2pm-2am, plus commute, 4 – 5 days a week, each day leading up to the thrill of the band stepping on stage and breathing fiery life into the day’s labours. There were scary stints with established bands – Kevin Borich, where the gaps in her ability were sometimes patently obvious to the artist, and even the punters (she had to learn, quickly, the mysteries of tuning foldback). She worked with many up-and-coming indie bands, and a bunch of lost-in-time acts you’ve probably never even heard of.

Exciting times. How cool to be paid to do this for a living!

In between gigs, she joined crews of hired muscles, unpacking semis for big touring acts. A punishing pace, but she loved it – proud to be gaining acceptance as a female on the crew.

Early ‘90s she got a “proper job” as sound hire staff of Grafton’s Sound, eventually becoming Hire Manager, still assembling and loading Pas, but with a home-life too.

Eventually, as the live scene shrunk, she scored a job in the sound department of the Sydney Opera House, and stayed for 10 years, discovering all manner of non-rock-n-roll performance. She learned to mic orchestras, tap-dancers on bubble-wrap and once, even the spines of a cactus…for a plinkety-plink cactus solo with the Sydney Spring Ensemble during the opening of the Studio..

The march of time, and demands of parenthood, meant her working life morphed to operation at a bunch of annual regional music festivals, supplemented with local community gigs.

After about 7 years of spending each January in Tassie operating the popular Cygnet Folk Festival, she made the move to live in that beautiful part of the world, and  – 6 years further on, on April Fools Day 2021, ran – SPLAT – into the back of an 18 tonne truck. embedding her lower body into the front of her trusty HiAce.

Life can change in a split second.

Now, with the bulk of her legs and pelvis having being patched back together by some jolly clever surgeons, she’s trying to wrangle thru the post-accident paper-work from her hospital bed, occasionally stopping to delight in the sight of one set of toes wiggling on demand at the end of the bed.

She is on the long slow healing process, managing -mostly – to keep a positive outlook

Short-term, all she can do is lie in bed, and wiggle the toes of one foot, and – excitingly, her hips, just a little bit (new development, that).

A wheelchair has just appeared in the corner of her room and she looks forward to one day swinging into it, and…wheeee!

Before the crash, she was ¾ thru the building of a tiny house, using a skilled carpenter, and 2nd hand building materials sourced, over 4 years, from the recycling yard at which she now works, well-…DID work.

She would never have imagined (let alone prepared) that on the morning of the crash, she would not return home for 3 months, and then, in a wheelchair, but the property is not ready for that.

We want Kathy to come home to a place she can comfortably spend the rest of her recovery in – we think she deserves at least that much.

All donations will go toward preparing a more live-able space in her property, for when she leaves the hospital, and for any preparations to help with rehabilitation for when she learns to walk again.

Please donate to Kathy O’Hara to “Get this old Rock Chook Back on her feet!”

On April Fools Day 2021, a nasty vehicle accident (you’re right! There are no nice ones.) put me in hospital.

Given the extent of my injuries, the future looked grim; my surgeons did not mince words.

Three months later, still in hospital, with most of the repair operations done and a fledgling physio regime underway, I now believe that I will totter back up on these legs again in the foreseeable future.

Thanks to SupportAct, I have not been left alone.

This well-named organisation have provided massive assistance in the form of:

May you go from strength to strength.