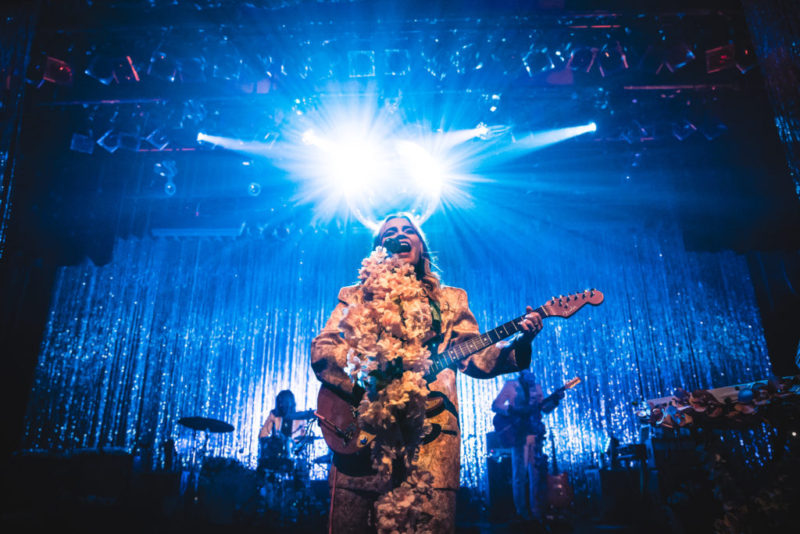 For World Mental Health Day, Home & Hosed’s Declan Byrne speaks to Jack River, Caleb from Tiny Little Houses, and Support Act to delve into what it’s really like being a musician in Australia.

It sounds like the dream lifestyle. Your music is played on radio, in clubs, and at gatherings all around the world. You tour and party with your best friends for months at a time. Adoring crowds sing and dance to your music and all the while, you’re making money doing something you love.

But that’s exactly what it is, a dream. That kind of success, if it ever comes, can take a serious physical and mental toll and for a lot of Australian musicians, it’s a tireless pursuit with no guarantees.

Maybe the highs you hear about aren’t worth the lows you don’t.

The stresses on budding musicians come from all angles, and its a career potentially riddled with insecurity and instability. Holly Rankin, better known as Jack River, says the two biggest stresses for her are time and money, “like probably any industry or job, but more so in music because of the unpredictability.”

Having built her career over the last eight years, Holly reflects that “the amount of time to get into a position where you can actually do music as a job… is far longer than I ever imagined.” She’s learned that “the model in music is that there is no model. It’s a very tough business to make a profit in… the artist is always the last to receive revenue.”

For artists on-the-up, music has no money and security-making guarantee for a long time, which is a real challenge to the wellbeing of any budding musician.

Clive Miller is the CEO of Support Act, a charity founded to specifically help those in the music industry affected by hardship. He agrees that time and money are huge issues, “financial insecurity… that’s a really big trigger for anxiety and depression.

In most cases, Australian musicians have multiple jobs to support their dream. Caleb Karvountzis from Melbourne band Tiny Little Houses says that “music is one of those things that becomes all-consuming if you want to be good at it and live it. It affects everything else in your life, it’s a hard thing to balance.”

Completely dedicating yourself to a pursuit that can give nothing back, in terms of a steady income, doesn’t sound like a good relationship. In fact, it sounds like one you’d want to split up with after a while.

Caleb agrees that for so long, the life of a musician is based on breaking even – at best. “Until you crack that next level, it’s so hard,” he says. “There’s a ceiling for nearly everybody, until you get past that, when you can do say two shows of a couple thousand capacity around Australia.”

Which leads to the next piece of the puzzle…

Touring is a knife edge situation for the majority of Australian musicians. The thrill of touring and playing live can so easily come at a cost to their bank accounts and physical and mental health.

“Touring’s quite tough, it takes a special person to love touring,” admits Holly, who’s had years of touring under her belt. “As humans, we really need safety and home and that repetitive feeling of being comfortable. With touring you really don’t have that.”

Caleb adds that financially it’s not unusual for touring to result in a loss. In Australia, it’s especially tough because “travel is so expensive… you’re spending thousands of dollars on flights just to get from one city to the next. It wipes out all your margin; it means you don’t make any money at the end of the tour”.

As Clive says, musicians are also “away from their families and support networks… that can create issues as well.”

Driving is a cheaper alternative to flights, but it’s physically demanding when you have to be up early to drive 10 hours to the next city after a late show the previous night. It puts that 30 minutes on-stage in perspective.

As Holly reiterates, you’re being physically and “emotionally dragged to different places” night after night. It’s not a winning formula but it’s one that so many young musicians choose to take on.

There are of course ways around the gruelling tour life but it involves serious commitment, planning, and discipline. It’s a lifestyle that needs so much put in place to be sustainable.

When Holly is away on tour, she tries “to combat it with a really strict routine… It’s so important to let our minds breathe”. She finds exercise, zero alcohol, and a small team dinner gives a sense of normality to ease the stress on her and the band.

We’ve all heard the stereotype: that tragedy breeds creativity and how setbacks and sadness can produce entire records. That idea of ‘suffering for your art’ is one Caleb knows all too well.

In the 18 months after releasing 2018 debut album Idiot Proverbs, he’s gotten married, and focussed more on “work and friends,” he says. “I’ve been way more steady and happy but I haven’t been inspired to write anything. It’s a double-edged sword.”

Before this period of stability, Caleb confesses he craved the lows, because he felt the worse off you are “the better you can write. Sometimes you can get addicted to being in that place where everything is going wrong, but you’re feeling all melancholy and inspired when it’s all going wrong.”

Combined with the uneasy financial security it’s clear that the quest for musical success often comes before mental health and emotional stability. A quest that can have endings.

“One of the worst days ever”

At his lowest point, Caleb describes being “on the cusp of making a lot of sacrifices for music and it wasn’t really getting me that far; I was feeling pretty rubbish.”

So, he wrote the song ‘Garbage Bin’, reflecting his state of mind and the fact he was “feeling pretty out of control.

He sent the song to a friend he’d met and formed an instant connection with: Melbourne musician Fergus Miller, best known to fans as Bored Nothing. They recorded ‘Garbage Bin’ in Miller’s loungeroom the very next day. But within a month, tragedy struck.

In October 2016, Fergus took his life after a long battle with depression.

Caleb received the news while waiting at the airport. “I thought it was a joke, a cruel prank,” he recalls. “I just cried for a couple of hours in the carpark. It was seriously one of the worst days ever.”

Even though Caleb had “assumed there was some darker thing going on [with Fergus] because his music was so beautifully sad, it was [still] such a shock.”

He thinks family and friends knew but had “never really picked up that it was as severe as it was because when I hung out with [Fergus] he was such an awesome person to be around. So positive and loving and energetic and excited. You’d never would have expected it”.

The event was a “wake-up call to put things in perspective”. The stress and instability of musical ambition had taken a toll on Caleb and it caused him to “take a fresh look at how I was going about my life”.

“Music is a wonderful thing, but it can be quite destructive to your life and make you unhappier. Even though there’s all these extreme dopamine rushes when you create something new or go on tour… I don’t think all that effort sometimes is worth how much you have to sacrifice in other areas”

Holly has had numerous setbacks in her life that have shaped her outlook on a career in music. She agrees that staying healthy, and structuring the musical lifestyle to make it a top priority, is crucial.

“There has to be a balance, life isn’t shiny… I’ve gone through really hectic depression as an 18-year-old and gnarly anxiety and I learned to be really honest to people… as soon as you’re honest, they react, they give you beauty back.”

That band member and friend was Luke Liang, a prolific Sydney musician who died age 28 in August. A former member of Papa vs Pretty, he had played live with Alex The Astronaut, M-Phazes, and was set to go on tour last month with Jack River.

When someone calls up, CEO Clive Miller says, “they are talking to people that do have empathy and understanding for what it is like to be in the music industry, what the lifestyle is all about and what some of the specific issues are.”

He says it’s encouraging to see “growing conversation over the last couple of years about mental health and wellbeing… [It’s] an issue that people are much more comfortable about acknowledging and talking about now.”

There’s been big steps over the last few years in discussing mental health, and the reality faced by aspiring musicians in Australia. Although there is still a long way to go, it’s clear that the importance of wellbeing is being prioritised more and more.

if you or someone you know needs help, please contact any of the below

Running on empty towards an unsafe workplace