SUPPORT ACT SERIES ASKS MUSIC COMMUNITY TO TUNE UP, NOT OUT

The series goes deep into each subject’s raw, and deeply personal mental health journeys, in some cases further exacerbated by the COVID-19 pandemic, what it took to take control of their own wellbeing and what they do now to stay on track.

When discussing a low-period in her life, GFlip said, “It’s scary, because you think you’re never going to get out of it.”

Sahara Herald said, “I hope that my story might help just one other person.”

The series aims to demonstrate that mental health issues can affect anyone, but that there are healthy ways to pursue a career in music and that support is available through Support Act for those who make music their career.

“Now more than ever we need to ensure that conversations around mental health happen publicly and regularly, especially in the music industry which sees alarming rates of mental illness persisting,” says Clive Miller, CEO Support Act. “The Tune Ups content series is not to sensationalise, but to show people they are not alone and that there is support available.

“We are working with both individuals and the industry to remove stigma and put in place strategies to increase support and resilience, including delivering mental health first aid training, increasing capacity of our Wellbeing Helpline, and developing a new online mental health portal with critical music industry specific resources.

“These programs are potentially life-saving.”

Tune Ups is supported by the Australian Government through the Office for the Arts, Brag Media and YouTube.

Watch each episode at supportact.org.au/tune-ups

Brendon Love is bass player for the 4 x ARIA Award winning The Teskey Brothers. Brendon discusses his anxiety and depression, how his band and management look after each other’s mental health and what happened when he contacted the Support Act Wellbeing Helpline. Brendon is a Mental Health Advocate for Support Act.

With pop hooks galore and drum sticks in hand, G Flip is fast becoming one of Australia’s best-known artists, here and abroad. G talks about the impact the pandemic had on her mental wellbeing during lockdown and what she does to stay mentally well.

Living by the music mantra “the show must go on”, Howard Freeman details how life as a crew member has its ups, but equally is a lifestyle that can lead to more than a few downs. Howard, one of the Australian industries most iconic Roadies (AC/DC, INXS, Big Day Out) and Co-Founder of CrewCare, has turned to boxing for its physical and mental health benefits.

Described by GQ as “The New Matriarch of Australian Rap”, Barkaa – a proud Malyangapa, Barkindji woman – is truly one of Australia’s rising stars of the music scene. Barkaa talks candidly with Support Act about homelessness and drug addiction, and the incredible resilience she found through her “sister girls” to rise up to be the artist and mother she wanted to be.

Fanny Lumsden has had a year like few others. Recounting the fight against catastrophic bushfires threatening her community in the Tooma valley, through to becoming one of Australia’s most celebrated country music artists, winning her first ARIA Award, five CMAA Golden Guitar Awards and an Australian Music Prize nomination. Fanny discusses how she balances family, constant touring and success, whilst keeping her own mental health in check. Fanny is a Mental Health Advocate for Support Act.

Ziggy Ramo is one of the most important voices in Australian music right now, tackling issues of racism and mental illness on his AMP shortlisted album ‘Black Thoughts’.

Sahara Herald is Tour Director for Frontier Touring and one of the most iconic figures in the modern Australian music business. Sahara talks openly about grief and loss, her battle against alcoholism and the steps she’s taken to recover. Sahara is now committed to reducing the stigma attached to mental health and addiction issues and supporting others in the music industry to seek the help they need. Sahara is a Mental Health Advocate for Support Act. 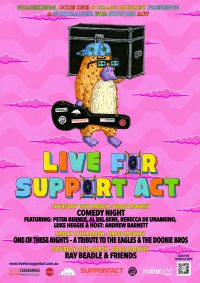 Live For Support Act by StageKings