MINDFULNESS TIPS FOR
MUSOS AND MORE

From the crowd, working in the music industry can look like a pure dream. But the more we talk about mental health and wellbeing, the more we learn that artists, managers, roadies, and the people in their lives often find themselves facing just as much struggle as they find and face success. The hours, the expectations, the stakes, the pay, and the habits together make for a pretty tumultuous day job.

Support Act has been a safety net for artists and music workers for the past two decades, providing practical and financial help to people in crisis. The recent launch of its free, confidential

Wellbeing Helpline means that anyone working in Australian music can now access 24/7 telephone counselling from mental health professionals who understand the pressures of working in the music industry.

Levi’s and Support Act present Tune Ups: Mindfulness tips for musos and more a look into how people in the Australian music industry— singer songwriters, stage managers, and agency heads —practise ways to look after their mental health and wellbeing. From heading off the beaten track to appreciate native flora, to turning the kitchen into a comfort food factory. 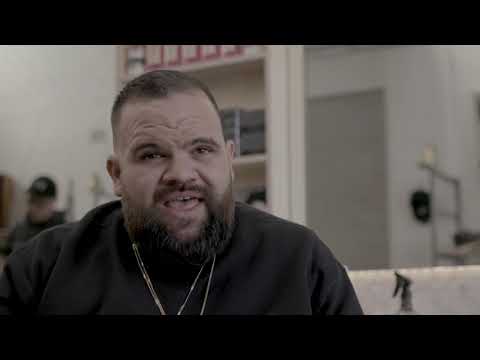 Among his ARIA, APRA and triple j awards, his many writing and acting credits, and his sterling Twitter banter, Briggs has proven himself (again and again and again) to be one of Australia’s most significant voices. And with that, comes great responsibility. Briggs finds solace and satisfaction in taking time out for himself, including here with his barber.

On the odd occasion that Maggie Collins isn’t buried in her laptop or waiting for a flight, as part of her job managing artists like DZ Deathrays, you’ve got an okay chance of finding her in the kitchen—making comfort food, and a bit of a mess—where she says her mental health gets a refresh.

Stephen Wade’s twenty-something years in the business, and his thirteen years as owner of behemoth artist agency Select Music, has given him many a view behind the curtain of Australia’s music business—and beyond. Still, “mental health is the most important issue in the whole industry”, he says.

Alex the Astronaut released her first record while living in New York on a soccer scholarship. So maybe it’s not surprising that she finds respite in being physical—be it at the gym, on the field or, with a little help from a yoga app while touring.

Once a roadie, Cam Batten now stage manages herculean projects like Falls Festival and A Day On The Green. While a big chunk of his time is spent on the road and focused on the job, Cam uses time alone to pursue his love of native plants in the cities he finds himself in. Meet Cam and the Everlasting Daisy.

Joel Birch is a photographer, illustrator, mural maker and perhaps, most famously, frontman of The Amity Affliction. He speaks openly and honestly about his coping mechanisms, which include drawing and photography.

Tom Larkin has been a career musician for the past 30 years, as the founding member of the NZ rock band Shihad. Having established a base in Melbourne since 2003, Tom is also the director of VVV MGMT responsible for overseeing the careers of Kingswood, Devin Abrams, The VANNS, Eliza & The Delusionals, Woodlock, and Villainy. Tom has carved out a niche as an artist developer with his work as a producer and owner of HOMESURGERY RECORDINGS, a studio based in the suburb of Brunswick, and in 2018 was appointed as Conference Programmer for BIGSOUND. “I feel there is no greater area of vulnerability that artists are exposed to than managing their mental health and wellbeing within the music industry. Support Act has the ability and attention to make meaningful change and I would like to give as much as I can to help achieve that.”

David is the CEO of Alberts and is part of the fifth generation to work in the Albert family business. He joined Alberts in 2004 after a career working across the globe in marketing roles with companies including Coca-Cola, Eastman Kodak and Kelloggs and back home with telecommunications companies Optus and Telstra.   In 2016 David oversaw the sale of the music business J. Albert & Son to BMG and has been instrumental in consolidating and growing the Alberts business including expanding its philanthropic activities and the establishment of Alberts Impact Capital (AIC) in 2018. David holds an MBA from the Macquarie Graduate School of Management, a Masters from the University of Massachusetts, is graduate of the Australian Institute of Company Directors and holds several not-for-profit director roles. David brings music industry and governance related experience and has previously been the co-chair of Nordoff Robbins Music Therapy Australia and served on the boards of APRA, AMCOS and AMPAL.

Alethea Beetson is a Kabi Kabi + Wiradjuri artist and producer living on stolen land in Brisbane. She is the Artistic Director of Digi Youth Arts and First Nations Producer of the following festivals: BIGSOUND, Yonder, Horizon Festival and Brisbane Street Art Festival. She is currently undertaking her Doctorate in Creative Industries at QUT, Brisbane. Alethea is a trained mindfulness and emotional intelligence educator. “I love First Nations music and want to ensure all organisations and spaces cater to the specific needs of my community – from a place that is informed by those communities and does not homogenise the Indigenous experiences in this country.”

Sally has worked with APRA AMCOS for over 30 years, most recently as the Head of Member Services and prior to that the Director of Membership. She is now a Senior Advisor to both and is based in Melbourne. She is passionate about Australian music, dabbles in song writing and plays guitar (badly). Sally is a Director of the Australian Music Centre (AMC) and the Archie Roach Foundation. Sally was appointed Chair of the Board in 2013. “The world can be a tough place and the music business even tougher. The market failings for music professionals are numerous and the outcomes heartbreaking. I choose to help to try and make a difference”.

Originally from Darwin, Leah has been active in the Northern Territory arts community working with Indigenous and non-Indigenous Artists across the music and visual arts industries. Since relocating to Sydney, she has been employed in Programming roles by the Sydney Festival, Sydney Opera House, Campbelltown Arts Centre and Arts Law Centre. Leah is an active touring songwriter and musician and is a proud APRA Writer Member Ambassador.

John O’Donnell, the Managing Director of EMI Recorded Music Australia, is one of the most highly regarded music executives in Australia. He has spent 30 years in the music industry; after a career in music journalism, as Music Editor at Rolling Stone magazine and Editor of Juice magazine, he joined Sony Music in 1994 and started the internationally successful Murmur label, signing Silverchair, Something For Kate, Jebediah and more. In 2002, he was appointed CEO of EMI Music Australia/NZ, enjoying an unprecedented run of local and international success with Australian artists like Empire of the Sun, Silverchair, Angus & Julia Stone, Jet, Paul Kelly and Missy Higgins.  In 2008, he departed EMI to start his own consulting business, which saw him co-author the acclaimed and top-selling book The 100 Best Australian Albums and become co-manager of the legendary Australian band Cold Chisel. He returned to EMI in early 2013 and continues to co-manage Cold Chisel. Over the years John has been a member of the ARIA Board and he also served as Chairman of the industry’s PPCA Board from 2005 – 2008.

Karin Lines is currently the Executive Director Mental Health Branch, NSW Ministry of Health, after six years as the Executive Director of Clinical Operations (Forensic Health). She has extensive knowledge and experience of health services in NSW, having worked in health for many years across all sectors. Her work has encompassed a range of different roles including clinical work, education, academic teaching, policy development and analysis, service development and planning, and many leadership positions. “My work with Support Act is dedicated to the memory of my son, Ashley Hansen, who was a wonderful musician, singer and songwriter .”

Mark is the singer songwriter of iconic Australian bands GANGgajang and The Riptides. He’s toured nationally and internationally, written songs for artists as diverse as Jimmy Little, Debra Byrne and Nathan Cavaleri, composed the theme music to over a dozen TV shows and had his songs in plays and countless films. Mark has also worked in the music business for a number of years and is currently Member Service Advisor at APRA AMCOS. “I’m involved in Support Act to help my fellow musicians and music industry professionals currently experiencing a crisis to get back to doing what they love – working in music”

Lynne has acted as Company Secretary and Treasurer since 1998, and is also the General Manager for both the Australian Recording Industry Association Ltd (ARIA) and Phonographic Performance Company of Australia Ltd (PPCA). Lynne is also a Director and Treasurer of the Australian Copyright Council.

John Watson is the President of both John Watson Management and the label, Eleven: a music company. Over the last 15 years every musician on the JWM and Eleven rosters has enjoyed either gold or multi-platinum success and the companies have also helped four separate artists achieve gold certifications in the United States. John’s companies currently represent Birds of Tokyo, Cold Chisel, Dustin Tebbutt, Gotye, Daniel Johns, Missy Higgins, Paul Mac and The Presets. In addition to 25 years of music business experience he holds a BA (Hons) from UNSW, majoring in politics. He has also studied law and in 2008 he earned a GDM from the Australian Graduate School of Management. “The music business can be wonderful but unfortunately it also leaves a lot of damaged people in its wake; Support Act is one way of helping colleagues who haven’t had much luck in their lives.”

Linda had over 30 years experience working in the music industry when she joined the board in 2013. She began her career at APRA in 1981 before moving on to the Royalty Department at Festival Records and later becoming the Royalty Manager at Warner/Chappell Music in 1992. Linda is currently the Distribution Manager at PPCA, a position she has held for over a decade.

Sebastian started in the music industry in the 1970s as an artist manager and is regarded as a pioneer of the independent music market, nurturing and facilitating the development of Australian artists for many years. He’s well-known for his compassion and deep seated desire for artists to carve out a self-sustaining music career.