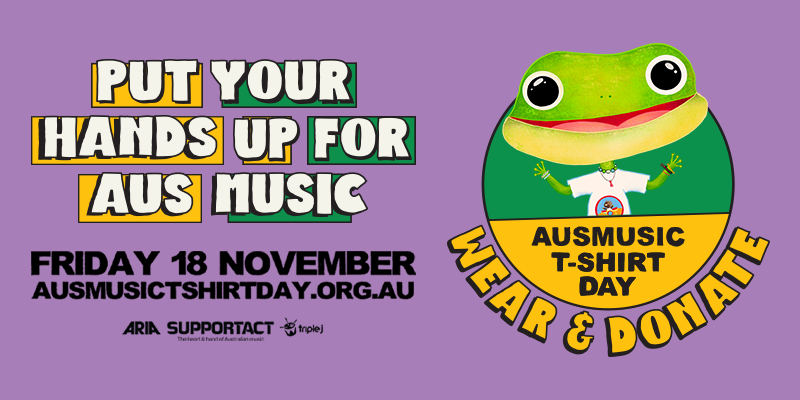 Anyone can get behind the day by simply wearing their favourite Aussie music t-shirt and making a donation to Support Act at ausmusictshirtday.org.au.

Participants are also encouraged to share their Ausmusic T-Shirt love on social media using the hashtag #ausmusictshirtday and tagging Support Act, triple j and ARIA throughout the day.

This year’s campaign has the backing of some of Australia’s favourite faces, including Chris Hemsworth, Jessica Mauboy, Darren Hayes, Casey Donovan, Kylie Minogue and 26 well-known faces of Australian music, screen and stage, who have all thrown their weight behind the cause.

Clive Miller, CEO of Support Act, explains: “With such huge profile ambassadors getting the word out there and an incredible bunch of fundraisers and donors supporting the cause, we have no doubt that this year will be our biggest yet!

“We encourage anyone who loves Aussie music and wants to support those working in the local industry to throw on their favourite Aussie music t-shirt and make a donation, so that we can continue to support music workers in crisis.”

Almost $200,000 has been raised so far with more than 650 fundraisers taking part, from industry bodies and record labels to creative agencies, social media platforms, venues and music fans.

There’s a raft of fun activities taking place throughout the day for people to take part in with family, friends or colleagues, whether it be in person or remotely:

Ausmusic T-Shirt Day is supported by ARIA and celebrated across triple j, Double J and the ABC as part of Ausmusic Month.

To find out more and get involved in this year’s campaign, visit ausmusictshirtday.org.au.